Cape Town’s city centre has recently become the topic of hot debate round the dinner table after news broke of the City’s plan to increase tariffs on its designated parking bays. It’s a bitter pill to swallow for anyone commuting into the City while those travelling in by public transport are somewhat immune to the new proposal.

The city’s transport planning department recently announced plans to increase the parking tariffs in several zones and in a City where parking already, at times, can cost more than the price of driving to the designated stop-spot – it’s no surprise the general public are up in arms.

The cost of traffic, congestion and giving away your time

What commuters forget, however, is the impact congestion on roads has in our lives and the fact our leader’s (City Council members, for example) are responsible for ensuring our living spaces – including roads – are as tolerable as can be. 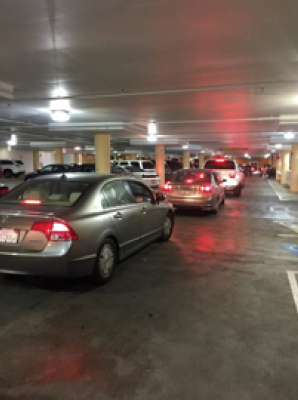 The average commuter may spend up to 3-hours a day in Cape Town traffic just having to complete a 15km trip to and from the office. In some cases, as we’ve discovered with research conducted at the Waterfront’s brand-new Silo District; one could add another 40-minutes onto their commute simply waiting to get out of a parking garage – its sole purpose to house vehicles underground for hours on end.

It’s when we start putting a value on our time, only then do we realise the true cost of traffic, congestion and time. It’s at this point one starts to question the true value of saving your time to become more productive and energetic.

Imagine we had to charge ourselves a fee for every hour we were not productive during a time where we should have been productive – one could argue you’d be broke after a month!

“Parking costs a fortune but it’s worth it”, some argue

In some cases, leaving your car in a basement parking for almost half a day makes perfect sense. Leaving your car to bake in the sun on street parking for hours on end makes less sense. But what about the convenience of simply having access to your vehicle when you need it? Is it perhaps this – perceived – lack of convenience in Cape Town and other major cities which makes commuting on your own worthwhile?

When you consider the average congested freeway, during peak hour traffic, is filled with single-occupant vehicles, you must realise the alternative options are clearly either not attractive enough, convenient enough or accessible enough.

Knowing your vehicle is just a few steps away offers major benefits to someone whose day constantly changes and has never had the opportunity to experience a perfect public transport system. Saying that, no public transport system is perfect so there’s even less incentive for someone used to the convenience of their own vehicle to ditch it for the unknown; this is where once can understand the cost of parking far outweighs the cost of being inconvenienced.

Changing the mindset and trying the alternatives

There’s an exciting shift on the horizon. This is where traveling to work is going to become exhilarating rather than cumbersome. The polar-opposite to one’s current self-drive-and-park experience is on the cards for those willing to delve into the unknown; and this is where the City’s forward-thinking plan to increase parking costs makes sense.

In a City where congestion is beyond comprehension, and public transport hasn’t quite solved the problem of having too many cars on the road, let’s introduce flx.

flx, pronounced ‘flex’, is set to change the way we commute by introducing the concept of flexible mobility. What started out as just an idea has morphed into more than just an imaginary thought; it’s become a technology platform for transport operators to launch their own flexible mobility solution – while at the same time it has created its own ride-sharing product which launched as a pilot in July.

With flx, commuters can jump onboard a share-ride which collects them from their front door and drops them off at their office; the same luxury shuttle – enabled with free WiFi – then fetches the Rider after work and takes them back home again – a true door to door share-riding experience.

But in order for flx to succeed, in a manner such as its European and American counterparts (ViaVan, Chariot, SmartRide, Slide and ArrivaClick) the Cape Town based shared-ride service needs to convince potential Riders it’s OK to leave their car at home.

Success lies in the adoption of shared and flexible mobility

To win-over the average commuter, services like flx will become increasingly reliant on two areas of adoption outside the Rider’s control.

In the first instance, City’s need to become smarter in the way they handle congestion. Hiking up the price of city-operated parking bays is perhaps one of the main ways to do this; but so too is the introduction of a corporate parking tax; a tax levied on corporates who are building parking – this may possibly result in less parking bays being built.

In the second instance, corporates should see opportunities like flx as a way of incentivising their staff to be more productive and improving their overall wellness – this can be done through financial assistance toward their flx ride in the same way corporates provide contributions toward medical aid and other such benefits.

But in the end, it’s the driver who must change habits and adopt a new way of thinking to become the rider

There’s a long list of ways corporates and cities can incorporate flexible mobility into the workplace; which in turn will undoubtedly have a positive effect on congestion, parking and traffic jams – but at the end of the day, it’s the driver whose mindset needs to change.

If single-occupant drivers start to see the benefits of shared mobility, it’s only a matter of time before they begin to adopt it. The cost, of course, will be a major stumbling block if the Driver considers fuel as the only cost – but if the Driver were to consider all the real costs, one would quickly realise: the sunk-costs of operating a vehicle with a single driver and no passengers is far more than the cost of sharing a door-to-door ride.

And when the Drivers realise the true value of saving time and being more productive – against sitting in traffic for up to 720 hours (30 days) a year – it’s at this point we know flexible and shared mobility is a true winner and will become the new cool.